AUD/USD trades to a fresh yearly low (0.6761) in July even as the Reserve Bank of Australia (RBA) delivers another 50bp rate hike, and the exchange rate may face headwinds later this week as the US Non-Farm Payrolls (NFP) report is anticipated to show a further improvement in employment.

AUD/USD CONSOLIDATES AROUND YEARLY LOW AHEAD OF US NFP REPORT

AUD/USD appears to be unfazed by the RBA as it consolidates within a narrowing range, and the US Dollar may continue to outperform against the commodity bloc currencies as the Federal Reserve normalizes monetary policy faster than its major counterparts.

As a result, the update to the NFP report may keep the Federal Open Market Committee (FOMC) on track to implement another 75bp rate hike as the economy is anticipated to add 268K jobs in June, and evidence of a resilient labor market may encourage the central bank to move towards a restrictive policy as the minutes from the latest meeting reveals “that an even more restrictive stance could be appropriate if elevated inflation pressures were to persist.”

In turn, the FOMC may take further steps to combat inflation as “many participants judged that a significant risk now facing the Committee was that elevated inflation could become entrenched if the public began to question the resolve of the Committee to adjust the stance of policy as warranted,” and it remains to be seen if Chairman Jerome Powell and Co. will continue to adjust the forward guidance at the next interest rate decision on July 27 as “participants stressed that appropriate firming of monetary policy, together with clear and effective communications, would be essential in restoring price stability.”

Until then, AUD/USD may fall towards the June 2020 low (0.6648) as it trades to fresh yearly lows in July, and a further decline in the exchange rate may fuel the tilt in retail sentiment like the behavior seen earlier this year. 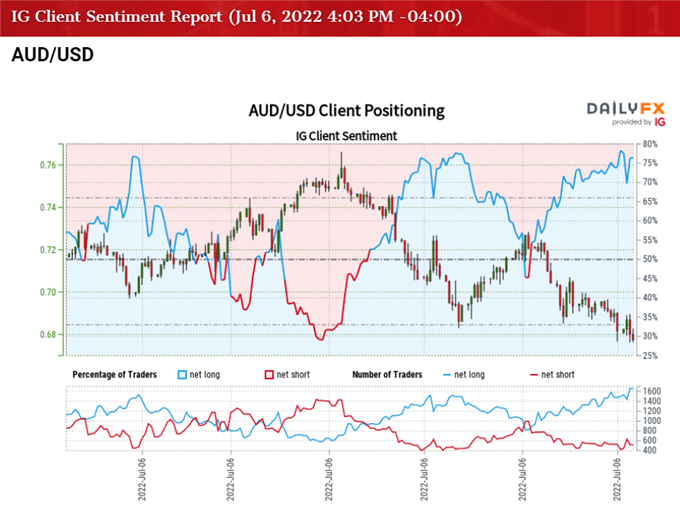 The IG Client Sentiment report shows 73.59% of traders are currently net-long AUD/USD, with the ratio of traders long to short standing at 2.79 to 1.

With that said, the update to the US NFP report may keep AUD/USD under pressure as a further improvement in employment encourages the FOMC to deliver another 75bp rate hike, and the exchange rate may fall towards the June 2020 low (0.6648) as it appears to be tracking the negative slope in the 50-Day SMA (0.7014). 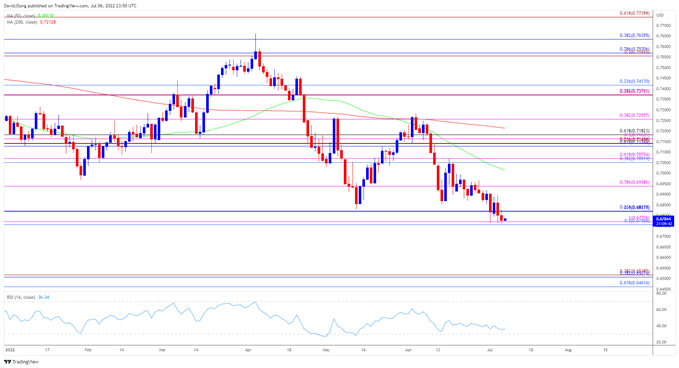