The Australian Dollar had another crack higher last week, notching up a 2-month high of just under 68 cents before recoiling amid a US Dollar reclaiming the ascendency.

The rally unfolded in the aftermath of the US PPI missing forecasts early in the week, following on from a benign CPI print the week before. This appeared to lead to hopes in the market of the Federal Reserve stepping back from its aggressive tightening cycle,

As the week progressed, we heard from a procession of Fed Board members including Mary Daly, John Williams, Chris Waller and Neel Kashkari.

They all re-iterated the hawkish Fed script ahead of the chief cheerleader of the rate hike brigade, St. Louis Fed President James Bullard. He said, “the policy rate is not yet in a zone that may be considered sufficiently restrictive.”

Equities tanked and the US Dollar dusted itself off and moved to the higher ground going into the end of the week, putting AUD/USD under pressure.

Domestically, the unemployment rate came out on Thursday, and it remained at multi-generational lows of 3.4% in September. This was below the 3.5% rate anticipated.

Among all the data and Fed speak the geopolitics of the Ukraine war added some volatility with a missile landing in Poland. Worries of an escalation in the conflict led to US Dollar buying to undermine AUD/USD.

The human cost of this battle cannot be overstated.

From an economic perspective, the conflict has illustrated that Russia is a direct competitor with many Australian exports.

Sanctions on Russia have seen Australia’s trade balance ramp up in 2022. The surplus of AUD 12,444 billion in September is a record. We will get the data for October in early December.

Ahead of that, the RBA will meet on Tuesday 6th December to decide on a cash rate target move. The market has priced in a possibility of a 25 basis point (bp) lift.

The next Fed meeting is on the 14th of December and there are expectations of a 50 bp hike from them. AUD/USD movements this week reflected the price action in AU-US yield spreads.

As the return From Treasury bonds increased more than Australian Commonwealth Government Bonds (ACGB), AUD/USD appeared to roll over at the same time.

This relationship might provide clues for the direction of the Aussie in the week ahead. 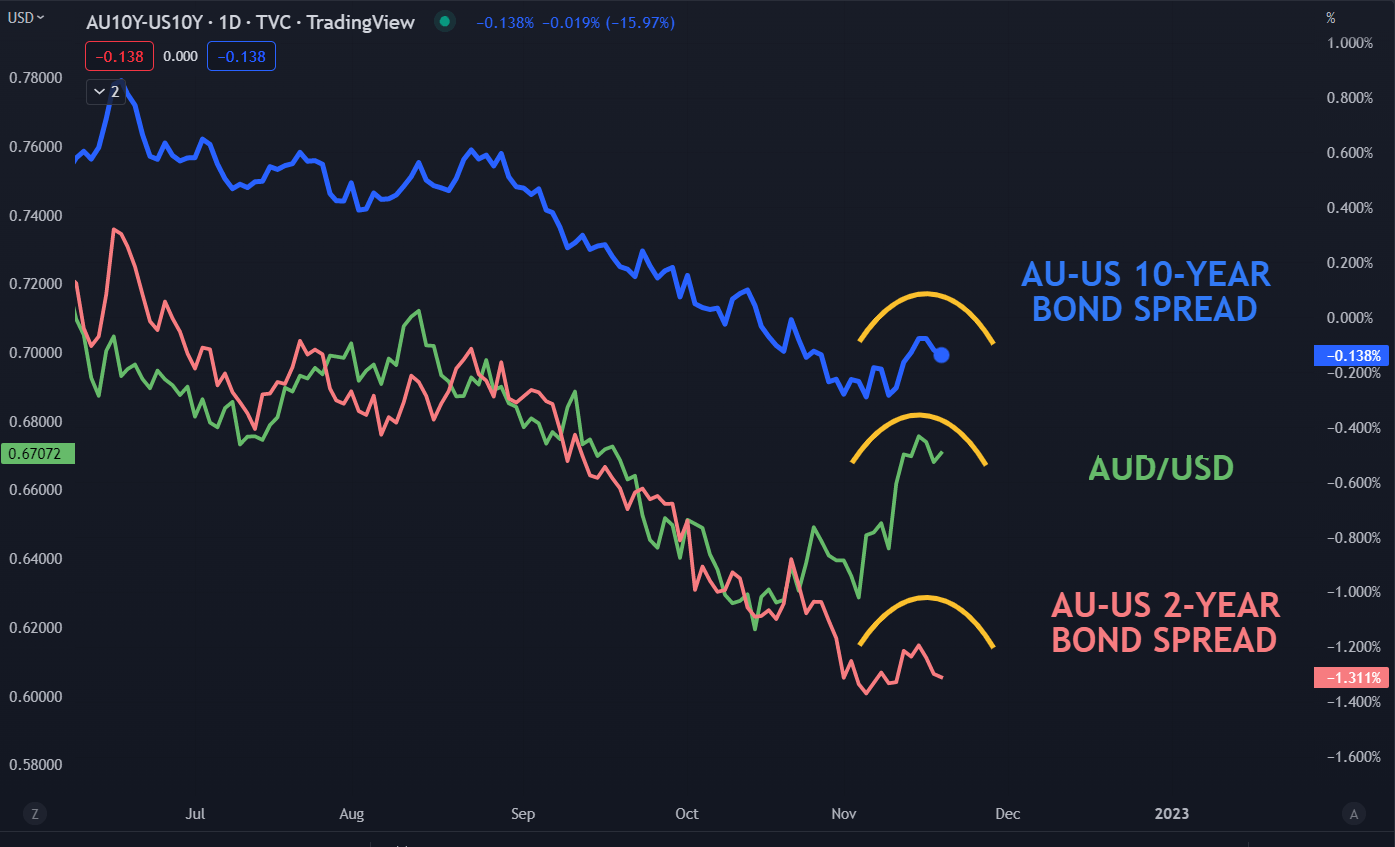