The Australian Dollar remains hostage to US Dollar fluctuations as the domestic economy is beginning to show signs of tightening fatigue ahead of the Reserve Bank of Australia’s (RBA) meeting on Tuesday.

Economic information out during the week was mixed, but overall, backward looking indicators painted a rosy picture while forward looking data illustrates that some clouds are brewing on the horizon.

July retail sales, somewhat of a lag indicator, were much stronger than forecast last Monday, coming in at 1.3% month-on-month instead of 0.3% anticipated and 0.2% previously.

The next day building approvals data revealed a -17.2% crash in July compared to June, way below expectations of -3.0% and -0.7% in the prior month.

Building approvals are viewed as a leading indicator for economic activity due to the work that is generated in the forthcoming period after the approval has been given. A significant dip in the data suggest there will be less work for engineers, architects, builders, equipment providers and so on.

Additionally, higher interest rates appear to be impacting the Australian housing market, with data from Corelogic on Thursday showing the largest monthly depreciation in August for forty-years. Sydney, the largest property market, fell 2.6% while prices across the nation fell 1.6% for the month.

A Bloomberg survey shows economists are forecasting a 50-basis point (bp) hike in the cash rate target by the RBA at their meeting this Tuesday. However, futures markets are pricing in closer to 40 bp, which would put the cash rate at 2.25%. Prior to the pandemic, the RBA maintained the rate in multiples of 0.25%. It is currently off that schedule at 1.85%.

After the US Federal Reserve set the record straight on their aggressive monetary policy tightening agenda last week, the global growth outlook has been somewhat muddied. Risk assets are under pressure and as a result the Australian Dollar has been crunched.

Going forward, the trend of US Dollar strengthening appears to be intact. Combined with overall negative sentiment, the Aussie could be undermined despite a large hike by the RBA.

The outlook China’s economic prospects are mired in lockdowns related to their zero-case Covid-19 policy and a property sector that rolls from one default to another mortgage strike. This is despite efforts by the government to restore confidence in the industry with multiple stimulus measures.

Fortescue CEO Elizabeth Anne Gaines delivered results during the week that shows robust Chinese demand for iron ore is unwavering. She re-iterated that forward looking contracts for consistent volume are still in place. Fortescue is one Australia’s iron ore titans.

The mining giant has a cost per tonne of iron ore of US$ 15.91 per tonne. All Australian miners are producing at less than US$ 20 per tonne. So, while the price of iron ore has moved down, the margin remains very strong.

Commodity markets have turned lower as a result of the growth outlook and a staunch US Dollar. 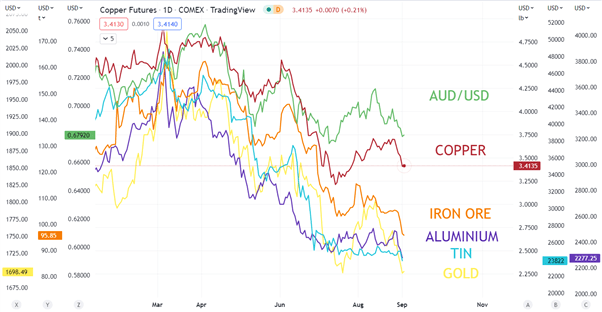 Australia’s trade balance for July is due out on Thursday, but it unlikely to match June’s astronomical and record-breaking AUD 17.67 billion. Forecasts are still looking for circa AUD 10 billion, a significant contribution to the nations bottom line. A lower AUD/USD exchange rate adds to the contribution from exports.

The ASX 200 has just got through an earnings season that was largely a very positive one. Unfortunately, the earnings reported are a lot like looking in the rear-view mirror and the market is focused on what lies ahead.

The gloomy global growth outlook and soft leading indicators has driven the ASX lower, and if bearish momentum continues, it might look toward testing the June low near 6400.

Australian second quarter GDP data will also be released this week after the RBA moves rates. It is unlikely to give too much away about the impact of the tightening of monetary policy. Although the initial rise in rates kicked off in May, the level of interest rates was still well below 1% until the third quarter.

This week is data rich for the Australian Dollar and the numbers may produce some volatility for the currency. External factors appear likely to impact AUD/USD, particularly Fed rhetoric and the flow on effects for the US Dollar.