Asia-Pacific Markets are set to open higher after stocks and other risk assets rallied in New York overnight. The benchmark S&P 500 rose 2.76% as traders brushed aside disappointing corporate earnings reports. A softening in Federal Reserve rate hike bets is supporting risk taking, with traders betting that the Fed may have to stop hiking sooner than previously expected.

The US Dollar DXY Index fell for the third day despite the Atlanta Fed’s GDPNow update for Q2 posting a weaker number, falling to -1.6% from -1.5% after weak US housing data. The Euro took advantage of the situation, benefiting further from strengthening rate hike bets for the European Central Bank’s meeting later this week. Overnight index swaps show a nearly 50% chance that the ECB will deliver a 50-bps hike. However, that leaves EUR/USD open to a pullback if the ECB disappoints.

European natural gas prices fell despite a crippling heat wave across much of Europe. A Reuters report, citing sources familiar, stated that the Nord Stream 1 Pipeline looks like it will resume operations as scheduled. The European Commission is set to deliver a proposal that would reduce natural gas demand across the European Union over the winter, according to Reuters.

Crude oil prices rose, benefiting from the risk-on tone across markets and a weaker US Dollar. A report from the American Petroleum Institute (API) showed a 1.86 million barrel build in US stockpiles for the week ending July 15. Still, supply remains extremely tight around the globe, and prices may continue rising if recession fears fall further.

China’s 1-year and 5-year Loan Prime Rates (LPR) are due for an update today. The Bloomberg consensus forecast shows those LPRs unchanged at 3.7% and 4.45%, respectively. However, a cut to the 5-year LPR wouldn’t be too surprising after a series of mortgage boycotts across the country in recent weeks. The Reserve Bank of Australia Governor Philip Lowe will speak from Melbourne at 9:10 am AEST. The Australian Dollar stands to benefit if Mr. Lowe comes off with a hawkish tone.

BTC/USD is on track to record a daily close above a level of confluent resistance made up of a resistance level from June, a descending trendline from March and the 50-day Simple Moving Average. Meanwhile, MACD is on track to cross above its midpoint, while the RSI oscillator strengthens above its midpoint. The next major obstacle for bulls is a support level that was in place from early May to early June. 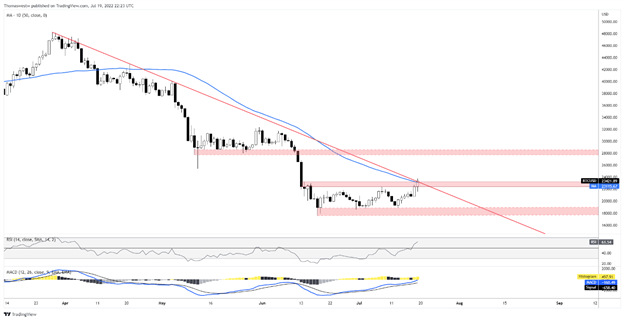