Most read: US Dollar Quickly Claws Back to the Highs – Threatens Topside Break

The British Pound was on track to finish the week sharply lower against the U.S. dollar on Friday, pressured by weak UK economic data, soaring U.S. bond yields and some risk-off sentiment. During New York afternoon market hours, GBP/USD was down 1.44% to 1.2840 on the day and off 1.68% over the past five sessions, trading at lows not seen since September 2020.

Various UK reports on Friday morning, including retail sales, manufacturing output and services sector activity for March, surprised on the downside, a sign that the recovery is faltering and that the economy is starting the second quarter on a weaker footing as surging price pressures curtail demand.

With growth slowing rapidly, the Bank of England (BoE) may not be as aggressive as other central banks in its fight against inflation. This means that we may only see moderate interest rate increases in the coming months, rather than front-loaded hikes such as those entertained by the Federal Reserve, which is now seen raising borrowing costs by 50 bps at its meetings in May, June and possibly July.

Hawkish repricing of Fed policy has pushed the U.S. 2-year yield up 128 bps to 2.72% since March. The 2-year gilt has also drifted upwards, climbing 66 bps to 1.70% over the same period, but its advance has been more limited, a situation that has widened the rate differential enjoyed by the United States.

Looking ahead, there is little reason to be optimistic about sterling. The increasing probability that the UK economy will contract in the second quarter and that the BoE’s normalization cycle will underwhelm expectations may keep GBP/USD subdued or prompt the next leg lower in the exchange rate.

Another variable that may undermine the British pound in the near term and other high-beta currencies for that matter is deteriorating sentiment. In recent days, market volatility has been on the rise as stocks have plunged across the board. If vols levels climb further and equities extend their sell-off, demand for safe haven assets are likely to increase, boosting king U.S. dollar.

GBP/USDMIXED
Data provided by
of clients are net long.
What does it mean for price action?
Get My Guide

In a technical analysis article published on Wednesday, I pointed out that price action signals were negative and that the development of a descending triangle pattern on the daily chart could portend further losses for GBP/USD. Since then, the bearish formation has been validated after the pair broke below support at 1.3000/1.2980, an event that has rejuvenated selling interest. In any case, with the recent moves, GBP/USD is approaching a key floor near 1.2830, defined by the 50% Fibonacci retracement of the March 2020 low/June 2021 advance. Traders should watch this area carefully in the coming days, as a drop below it could reinforce the ongoing sell-off and pave the way for a retreat towards 1.2670, the measured target of the triangle breakout.

In the event of a bounce, initial resistance lies at 1.2980/1.300, but if buyers manage to overcome this hurdle decisively, we cannot rule out an climb towards 1.3055, followed by 1.3200. However, the bullish case seems a far-fetched scenario at this point, with the bears firmly entrenched in the driver’s seat judging by the current price action. 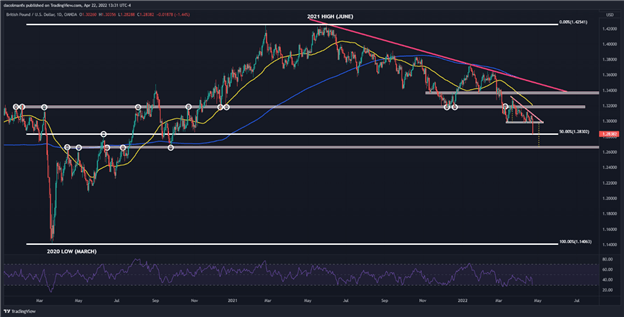