USD/JPY appreciates for five consecutive days as it extends the series of higher highs and lows from last week, and the exchange rate appears to be on track to test the yearly high (139.39) after clearing the opening range for August.

USD/JPY largely mirrors the rise in US Treasury yields as it trades to a fresh monthly high (137.65), and the exchange rate looks poised to track the positive slope in the 50-Day SMA (135.55) as it climbs back above the moving average.

As a result, USD/JPY may stage another attempt to test the September 1998 high (139.91) if it manages to clear the yearly high (139.39), and the diverging paths between the Bank of Japan (BoJ) and Federal Reserve may keep the exchange rate afloat over the coming months as Chairman Jerome Powell and Co. move towards a restrictive policy.

However, data prints coming out of the US may influence USD/JPY as the core Personal Consumption Expenditure (PCE) Price Index, the Fed’s preferred gauge for inflation, is expected to narrow to 4.7% in July from 4.8% per annum the month prior, and evidence of easing price pressures may curb the recent strength in the Greenback as it encourages the FOMC to adjust its approach in combating inflation.

In turn, the FOMC may implement smaller rate hikes over the coming months in an effort to achieve a soft-landing for the US economy, and it remains to be seen if the committee will adjust the forward guidance at the next interest rate decision on September 21 the central bank is slated to update the Summary of Economic Projections (SEP).

Until then, USD/JPY may track the positive slope in the 50-Day SMA (135.51) as it climbs back above the moving average, while the tilt in retail sentiment looks poised to persist as traders have been net-short the pair for most of the year. 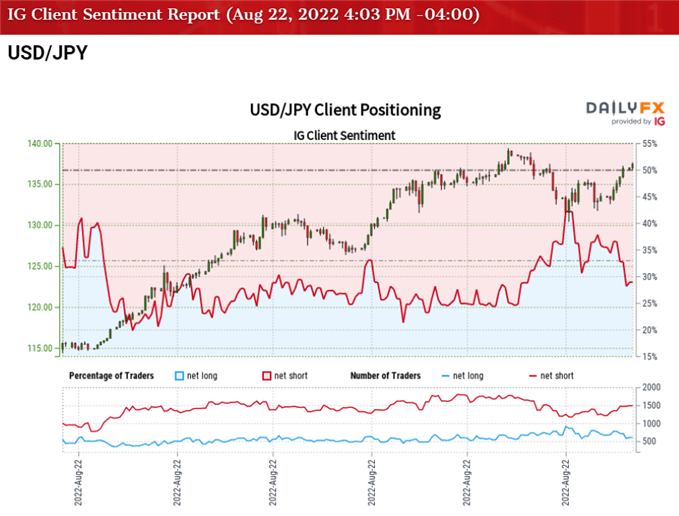 The IG Client Sentiment report shows 30.42% of traders are currently net-long USD/JPY, with the ratio of traders short to long standing at 2.29 to 1.

With that said, recent price action raises the scope for a further advance in USD/JPY as it extends the series of higher highs and lows from last week, and the exchange rate may attempt to test the yearly high (139.39) as it clears the opening range for August. 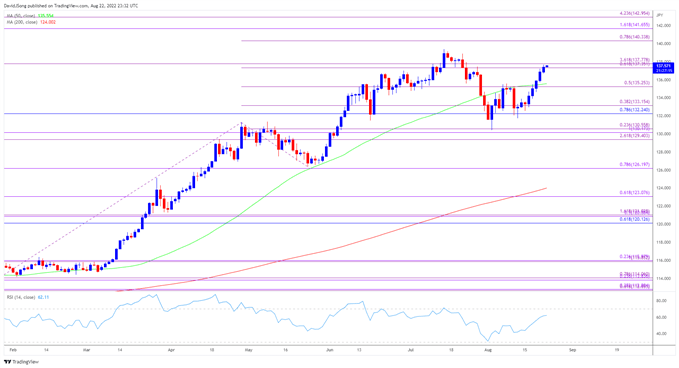