The Canadian Dollar’s performance was quite mixed last week despite considerable weakness in the US Dollar. While USDCAD punched lower, other Loonie pairs struggled. The mixed performance of the Canadian Dollar last week came as oil prices surged higher on the back of reopening news out of China. Despite the strong link between oil and the Loonie, some CAD crosses fell victim to broader global trends.

Looking to next week, the economic calendar is relatively quiet for Canada. Wednesday will see the release of October inflation data, which will likely weigh heavily on the Loonie. The Bank of Canada elected to slow its pace of rate hikes after a massively frontloaded rate cycle, as economic data in Canada continues to cool. Next week’s inflation print could bring about significant volatility in CAD pairs should there be a massive repricing of BoC expectations.

In comments made last week in Toronto, BoC Governor Tiff Macklem indicated that the central bank was open to smaller rate hikes moving forward. While saying that rates still “have further to go,” Macklem revealed that there “could be another bigger-than-normal step or it could be reverting to more normal 25-basis-point steps, we’ll see.” Macklem’s comments come at a crucial time, as broader economic data shows signs of slowing but inflation data remains hot. This is the dilemma that central bankers globally face; how far do you push in order to reign in inflation?

In additional comments made last week, Governor Macklem touched on the nature of Canada’s tight labor market. Macklem stated that labor markets must soften in order to lower inflation, as the economy remains in a period of “excess demand.”

The Bank of Canada is fighting considerable wage pressures, as vacancies remain elevated and wage growth remains broad. The Canadian economy added over 100k jobs in October, while the unemployment rate remained at 5.2%. Macklem went on to state that increasing labor supply is “not a substitute for using monetary policy to moderate demand and bring demand and supply into balance.”

Following last week’s US CPI print, a strong repricing of Federal Reserve rate hike expectations saw a massive move in the USD complex. As a result, USDCAD was able to make the clear break below 1.3500 before finding support into the Friday fixing. As more traders look to push the US Dollar lower, USDCAD may stand to benefit considerably. USDCAD bears were unable to tag or close below the 100-day moving average at 1.3225. Price did ultimately find support at September’s 1.3250 level, and this confluent area may offer bears a challenge in their quest for lower prices. The story here continues to be driven by the Federal Reserve, but next week’s inflation report in Canada may have its say in whether these key levels below are broken.

Overall, bears appear firmly in control and it may just be a matter of time before 1.3100 trades. While a countertrend rally would be painful, it cannot be ruled out given how far USDCAD has fallen in such a short amount of time. A retracement back to prior support at 1.3400 could easily materialize before the next leg lower to the 1.3000 area can begin. 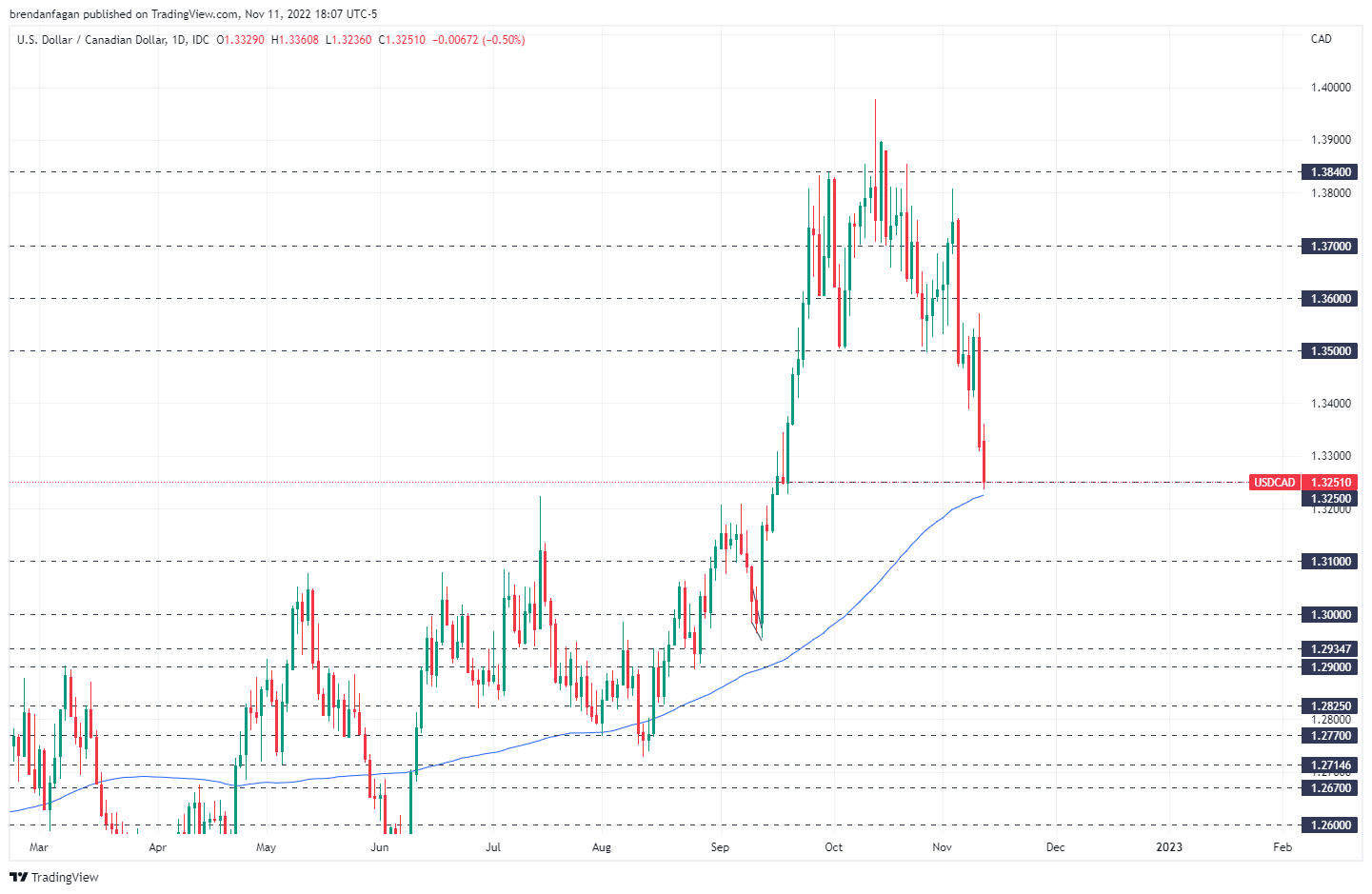