USD/CAD appears to be reversing course ahead of the November 2020 high (1.3371) as it initiates a series of lower highs and lows, and the exchange rate may attempt to test the 50-Day SMA (1.2861) for the second time in July as it extends the decline from the yearly high (1.3224).

USD/CAD is on track to test the monthly low (1.2837) as the recent advance in the exchange rate failed to push the Relative Strength Index (RSI) into overbought territory, and it remains to be seen if the pair will hold above the moving average to mirror the price action from earlier this month.

Looking ahead, the update to Canada’s Consumer Price Index (CPI) may keep USD/CAD under pressure as the headline reading is expected to increase to 8.4% in June from 7.7% per annum the month prior, and evidence of persistent inflation may encourage the Bank of Canada (BoC) to deliver another 100bp rate hike at the next meeting on September 7 as “the Governing Council continues to judge that interest rates will need to rise further.”

The shift in the BoC’s approach for normalizing monetary policy may keep USD/CAD under pressure as Governor Tiff Macklem and Co. step up their efforts to combat inflation, but the Federal Reserve interest rate decision on July 27 may influence the near-term outlook for the exchange rate as the central bank shows a greater willingness to implement a restrictive policy.

Until then, USD/CAD may stage a larger correction as it initiates a series of lower highs and lows, and a further decline in the exchange rate may fuel the recent flip in retail sentiment like the behavior seen earlier this year. 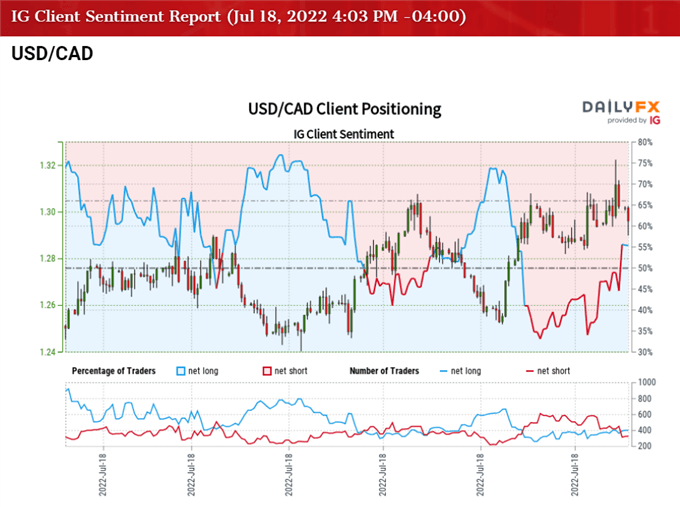 The IG Client Sentiment report shows 60.19% of traders are currently net-long USD/CAD, with the ratio of traders long to short standing at 1.51 to 1.

The number of traders net-long is 11.14% higher than yesterday and 22.68% higher from last week, while the number of traders net-short is 9.73% lower than yesterday and 33.71% lower from last week. The jump in net-long interest had fueled the shift in retail sentiment as 43.11% of traders were net-long USD/CAD last week, while the decline in net-short position comes as the exchange rate appears to be reversing course ahead of the November 2020 high (1.3371).

With that said, a material uptick in Canada’s CPI may generate a bearish reaction in USD/CAD if it fuels speculation for another 100bp BoC rate hike, and the exchange rate may attempt to test the 50-Day SMA (1.2861) for the second time in July as it takes out last week’s low (1.2937). 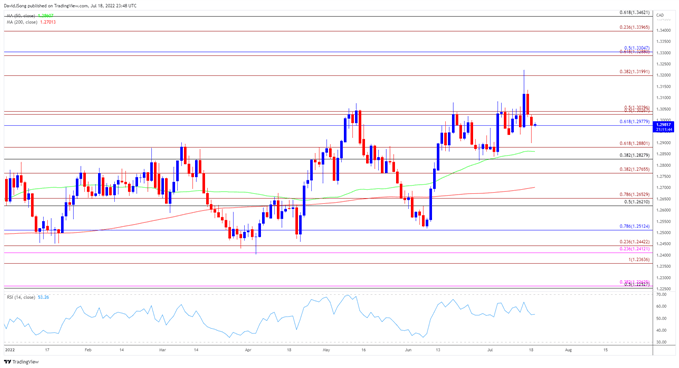