The price of oil dips to a fresh weekly low ($114.60) following an unexpected rise in US inventories, and crude may face a further decline over the coming days if it fails to defend the opening range for June.

The price of oil appeared to be on track to test the yearly high ($130.50) after clearing the May high ($119.98) earlier this month, but the advance from the June low ($111.20) may continue to unravel as the Relative Strength Index (RSI) develops a negative slope after failing to push into overbought territory.

It seems as though developments coming out of the US will sway the price of oil as crude stockpiles increase for the second week, with inventories climbing 1.956M in the week ending June 10 versus forecasts for a 1.314M decline.

Signs of easing demand may encourage the Organization of Petroleum Exporting Countries (OPEC) to retain the current output schedule after deciding that “July production will be adjusted upward by 0.648 mb/d,” and it remains to be seen if the group will follow a preset path over the coming as US output climbs to its highest level since April 2020.

A deeper look at the figures from the Energy Information Administration (EIA) show weekly field production climbing to 12,000K from 11,900K in the week ending June 3, and data prints coming out the US may influence oil prices ahead of the next OPEC Ministerial Meeting on June 30 as the recent rise in supply is met with indicating of slowing demand.

With that said, the failed attempt to test the yearly high ($130.50) may lead to a larger pullback in the price of oil, and crude may face a further decline over the coming days if it fails to defend the monthly low ($111.20). 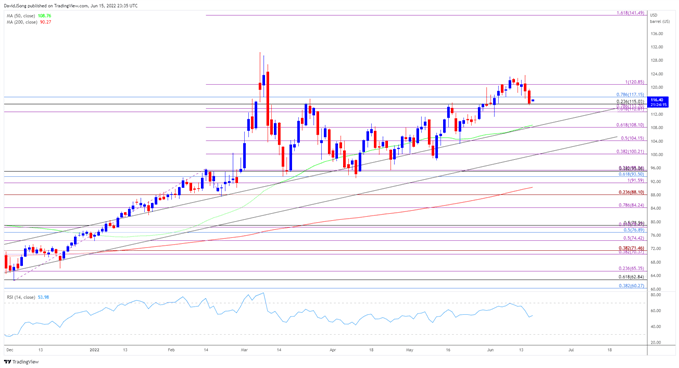