The price of oil consolidates after clearing the opening range for April, but crude appears to be reversing course ahead of the monthly low ($92.93) as it extends the series of higher highs and lows from earlier this week.

The price of oil attempts to extend the rebound from the weekly low ($95.28) following a less-than-expected rise in US inventories, and it seems as though current market conditions will keep crude prices afloat amid signs of limited supply.

Fresh data prints coming out of the US show crude inventories increasing for the third time this month, with stockpiles widening 0.692M in the week ending April 22 versus forecasts for a 2M rise. The figures may encourage the Organization of Petroleum Exporting Countries (OPEC) to gradually boost production as the group plans to “adjust upward the monthly overall production by 0.432 mb/d for the month of May 2022,” and OPEC and its allies may retain the current output schedule at its next Ministerial Meeting on May 5 as the most recent Monthly Oil Market Report (MOMR) states that “world oil demand is projected to average 100.5 mb/d, which is 0.4 mb/d lower than the previous month’s estimates and approximately 0.3 mb/d higher than 2019.”

Until then, signs of limited supply may fuel the recent series of higher highs and lows in the price of oil as a deeper look at the update from the Energy Information Administration (EIA) shows weekly field production printing at 11,900K for the second week, and crude may push towards the monthly high ($109.20) as it attempts to trade back above the 50-Day SMA ($102.89).

With that said, the price of oil may continue to exhibit a bullish trend in 2022 as OPEC retains a gradual approach in boosting supply, and crude may attempt to retrace the decline from the yearly high ($130.50) as it appears to be reversing course ahead of the monthly low ($92.93). 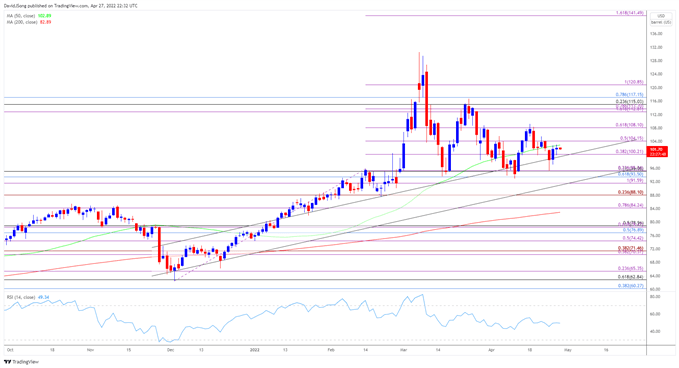