Oil prices are continuing to track higher following a move by the European Union to ban Russian oil. While the 27-member block must unanimously agree on the proposal, the majority seems to be in favor of the move. That follows months of scrambling in Europe to source alternative means of securing the commodity. WTI crude prices rose nearly 4% overnight, while Brent crude prices saw a similar move.

EU Commissioner, Ursula von der Leyen, stated that the proposed ban would target all imports, including refined products, both from seaborne and pipeline routes. The complete import ban was seen as an almost untenable position just months ago. Still, the ban, in its final form, is likely to take a phased approach, but the implication is nonetheless bullish for oil prices.

Another bullish driver taking shape is a sharp drawdown in diesel product storage in the United States, pushing prices at the pump to a record high. The Energy Information Administration (EIA) reported a 2.3 million barrel drop in distillate fuel inventories for the week ending April 29, pushing inventory levels 22% below the 5-year average. That may push shipping costs higher in the near term, potentially inflaming broader inflation into the economy. At a time when the Fed is hiking rates, it could be nearing a point of creating demand destruction later this year. However, in the short term, it is hard to see a sustained drop occurring. A pullback may be a tempting buying opportunity, given the circumstances.

Prices look well-positioned to advance higher. An ascending trendline continues to aid upward movement, along with the 20-day Simple Moving Average. The MACD oscillator is strengthening, and the Relative Strength Index is tracking higher from its mid-50 point. If prices close above the April high at 109.5, it may facilitate further strength. 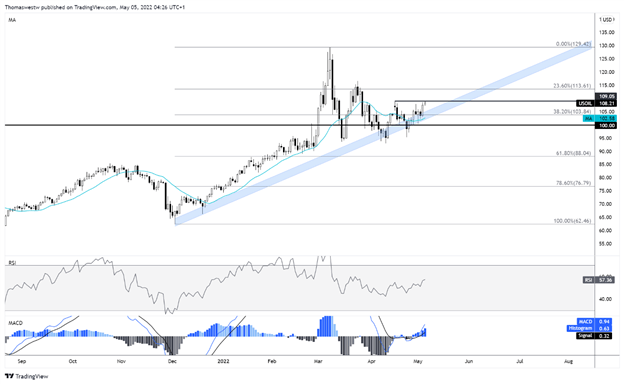 Prev Article
EUR/USD Breaks Out of Narrow Range to Pull RSI Out of Oversold Zone
Prev Article
S&P 500, Nasdaq Slammed, Yields Shoot to Highs the Day After the Fed