The price of oil is little changed from the start of the week even as the Organization of Petroleum Exporting Countries (OPEC) revert to their previous production schedule, but failure to test the August low ($85.73) may keep crude afloat as it snaps series of lower highs and lows from last week.

The price of oil manages to hold above the monthly low ($85.98) as OPEC emphasizes the “upward adjustment of 0.1 mb/d to the production level was only intended for the month of September 2022,” and it seems as though the group will no longer boost output in 2022 as “higher volatility and increased uncertainties require the continuous assessment of market conditions.”

The decision by OPEC and its allies may limit the downside risk for crude as the group appears to be on a preset path in managing supply, but signs of slowing consumption may continue to drag on the price of oil as the most recent Monthly Oil Market Report (MOMR) warns that “for 2022, world oil demand is foreseen to rise by 3.1 mb/d, a downward revision of 0.3 mb/d from last month’s estimate.”

With that said, the price of oil may face headwinds ahead of the next Ministerial Meeting on October 5 as it appears to be tracking the negative slope in the 50-Day SMA ($95.07), but lack of momentum to test the August low ($85.73) may foster a near-term rebound in crude as it snaps series of lower highs and lows from last week. 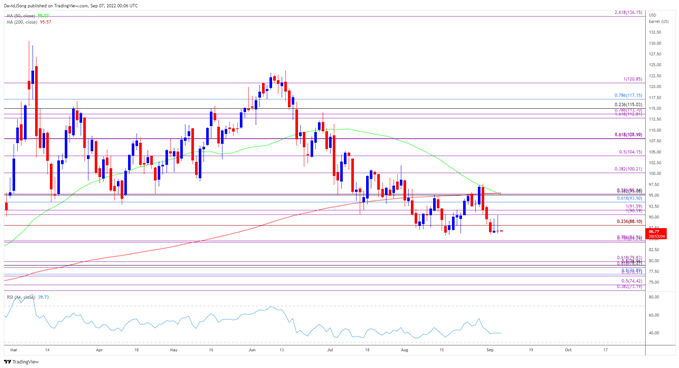