EUR/USD initiates a series of higher highs and lows as the Federal Reserve endorses a preset course for monetary policy, and the exchange rate may stage a larger recovery over the coming days as it breaks out of a narrow range.

EUR/USD trades to a fresh weekly high (1.0631) as the Federal Open Market Committee (FOMC) states that “additional 50 basis point increases should be on the table at the next couple of meetings,” with recent developments in the Relative Strength Index (RSI) raising the scope for a further advance in the exchange rate as the oscillator climbs above 30 to indicate a textbook buy signal.

The efforts by the FOMC to tame inflation may keep EUR/USD under pressure in 2022 as the central bank plans to wind down its balance sheet starting on June 1, but it seems as though Chairman Jerome Powell and Co. are in no rush to push the balance sheet towards pre-pandemic levels as “the Committee intends to slow and then stop the decline in the size of the balance sheet when reserve balances are somewhat above the level it judges to be consistent with ample reserves.”

Meanwhile, the European Central Bank (ECB) appears to be on track to switch gears as board member Isabel Schnabel reveals that “a rate increase in July is possible,” with the official going onto say that “even after the first increases, interest rates will remain at levels that continue supporting the economy” during an interview with Handelsblatt.

The comments suggests the ECB will prepare an exit strategy over the coming months as Schnabel insists that “it makes sense to gradually reduce bond portfolios at some point in the future,” and it remains to be seen if the Governing Council will adjust the forward guidance for monetary policy at its next interest rate decision on June 9 as “inflation proved to be more persistent than was previously expected.”

Until then, EUR/USD may face headwinds as the FOMC normalize monetary policy at a faster pace, and the tilt in retail sentiment looks poised to persist as traders have been net-long EUR/USD since the middle of February. 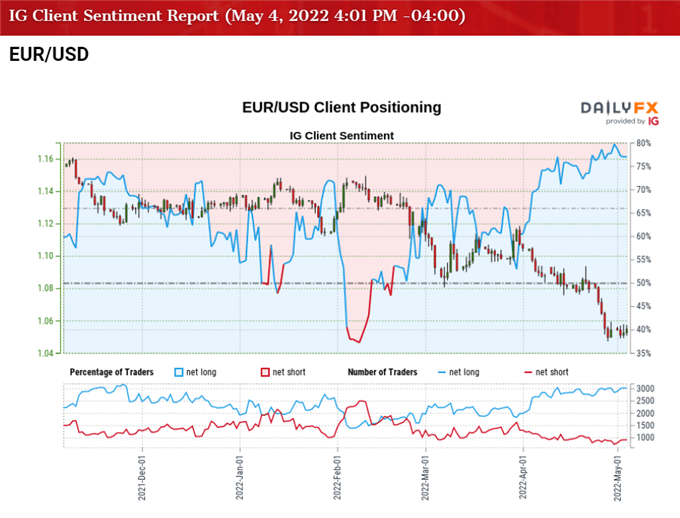 The IG Client Sentiment report shows 76.01% of traders are currently net-long EUR/USD, with the ratio of traders long to short standing at 3.17 to 1.

With that said, EUR/USD may continue to exhibit a bearish trend in 2022 as the FOMC changes policy ahead of its European counterpart, but recent price action raises the scope for a larger rebound in the exchange rate as the Relative Strength Index (RSI) recovers from oversold territory. 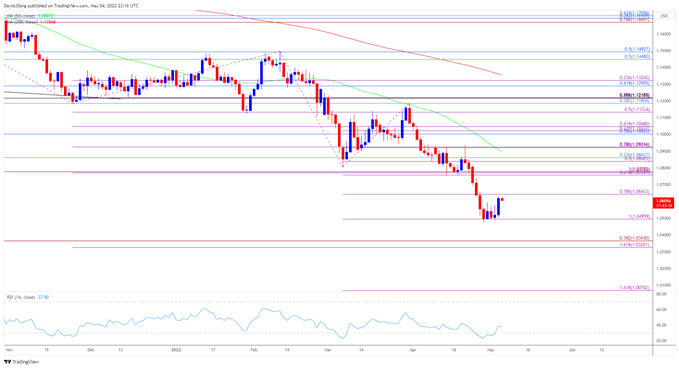