EUR/USD is on track to test the December 2002 low (0.9859) as it fails to defend the July low (0.9952), but the exchange rate may attempt to halt a three-day selloff as long as the Relative Strength Index (RSI) holds above oversold territory.

EUR/USD trades to a fresh yearly low (0.9926) after testing the former-support zone around May low (1.0349), and recent price action raises the scope for a further decline in the exchange rate as it extends the series of lower highs and lows from last week.

As a result, EUR/USD may continue to track the negative slope in the 50-Day SMA (1.0256) as the Federal Reserve prepares US households and businesses for a restrictive policy, and it remains to be seen if the account of the European Central Bank’s (ECB) July meeting will influence the exchange rate as the Governing Council appears to be on a slower path in normalizing monetary policy.

It seems as though the ECB will implement smaller rate hikes than its US counterparts after frontloading “the exit from negative interest rates,” and Christine Lagarde and Co. may follow a gradual path in combating inflation as the central bank acknowledges that “economic activity is slowing.”

In turn, the account of the ECB meeting may do little to prop up EUR/USD as the Governing Council shows little interest in implementing larger rate hikes, while the recent flip in retail sentiment appears to have been short-lived as traders have been net-long the pair for most of 2022. 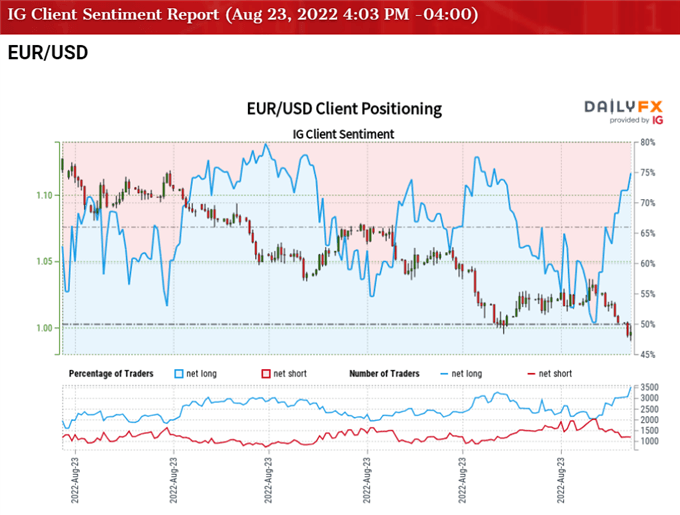 The IG Client Sentiment report shows 71.46% of traders are currently net-long EUR/USD, with the ratio of traders long to short standing at 2.50 to 1.

The number of traders net-long is 5.78% lower than yesterday and 19.52% higher from last week, while the number of traders net-short is 14.19% higher than yesterday and 17.08% lower from last week. The rise in net-long interest has fueled the crowding behavior as 63.46% of traders were net-long EUR/USD last week, while the decline in net-short position comes as the exchange rate fails to defend the July low (0.9952).

With that said, EUR/USD may continue to depreciate over the coming days it extends the series of lower highs and lows from last week, but failure to test the December 2002 low (0.9859) may generate a rebound in the exchange rate as the Relative Strength Index (RSI) holds above oversold territory. 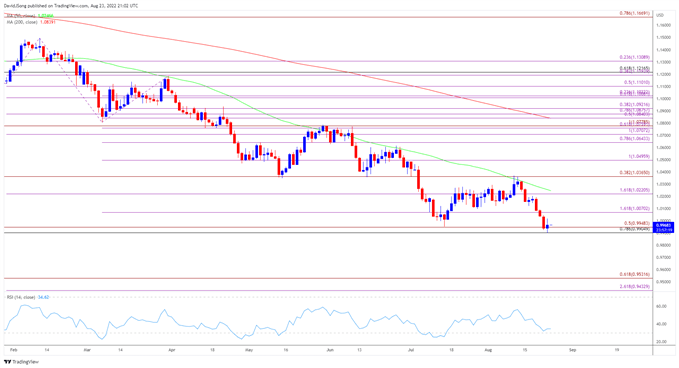