The Euro staged its worst performance against the US Dollar last week since late April, with EUR/USD falling about 1.87%. This was despite a hawkish European Central Bank that announced imminent rate hikes, an end to monthly asset purchases and an upgrade to inflation expectations. The central bank did however downgrade growth estimates.

At the end of the day, the Euro just has too much competition from the Federal Reserve. In one year, forward curves imply the Fed bringing benchmark lending rates to 3.78% while the ECB falling short at 1.93%. This was amplified by the latest headline inflation report out of the United States. CPI accelerated 8.6% y/y in May versus a hold at 8.3% seen.

As a result, the 2-year Treasury yield surged above 3% to its highest since 2008 and the markets began pricing in odds of a 75-basis point rate hike in July. Clearly, the Fed is falling increasingly behind the curve and faces more immediate pressure to tackle the highest inflation in 40 years. That is not to say that Euro Area inflation is lower by much, it is not. Headline CPI in the Euro Area was 8.1% y/y in May.

But, the focus this coming week is on the Federal Reserve on Wednesday now that the ECB has had its turn. This is leaving the single currency at risk. Not to mention, the Bank of England and Bank of Japan are also up. That is not to say that the Euro can’t find momentum from a hawkish ECB down the road, it certainly can. But, it seems this coming week, that story will have to wait. 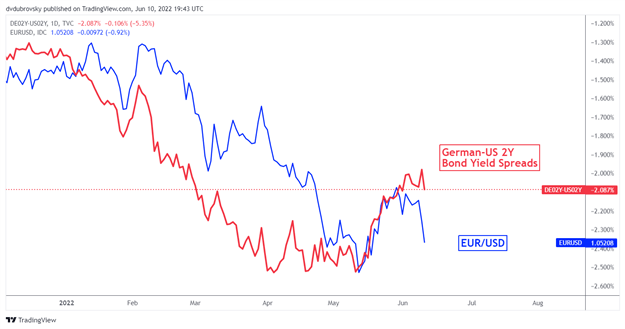 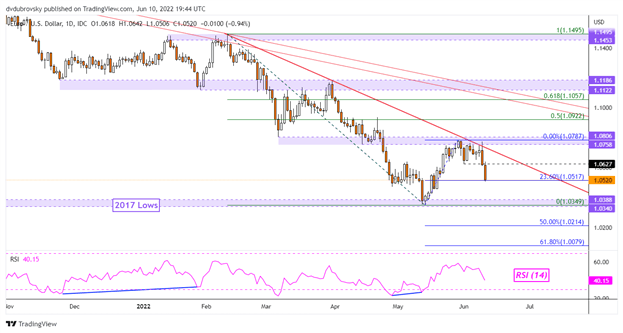