Bitcoin prices dropped more than 6%, outpacing losses on Wall Street overnight, where the Nasdaq-100 Index (NDX) closed 0.74% lower on its first trading day of the month. That price movement shows still-week sentiment across markets, stifled by fears of economic recession amid tightening monetary policy. Still, Federal Reserve officials continued their attempts to assuage investors of those fears. Tom Barkin, President of the Federal Reserve Bank of Richmond, stated, on Fox Business, “you can’t find a recession in the data.”

Today, Australia’s trade balance for April is set to cross the wires. Analysts expect to see the country’s trade surplus drop to A$9.0 billion from A$9.3 billion, according to a Bloomberg survey. The Australian Dollar remains largely unchanged after trimming earlier gains following a surprise beat in Australian fourth-quarter GDP data. AUD is likely to remain weighed down as traders flock to US Dollar safety. The DXY index rose nearly 1% over the past 24 hours.

Oil prices slipped again, although moderating from steeper losses earlier this week. The American Petroleum Institute (API) reported a 1.18 million barrel drop in crude oil stocks for the week ending May 27. Energy traders await tonight’s data from the US Energy Information Administration (EIA) to support that private data. The economic docket has PMI data from South Korea for May and May inflation numbers for Indonesia slated to cross the wires.

BTC/USD fell nearly 7% to kick off the month following a 15.61% drop in May. Prices sliced below the 20-day Simple Moving Average (SMA), approaching the 2021 low at 27,734—a level that defended a sharp intraday move last month. The MACD oscillator weakened, while RSI continued to fall from its 50 mid-point level, both bearish signs. If weakness continues, bears may target the 2021 low again. 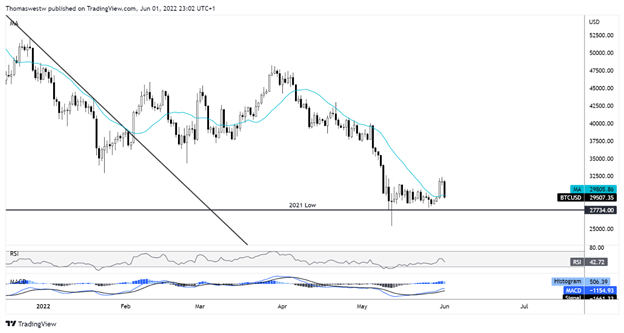