The recent rebound in the price of gold appears to be stalling as it fails to extend the series of higher highs and lows from last week, and the Federal Reserve interest rate decision may drag on the precious metal as the central bank shows a greater willingness to implement a restrictive policy.

The price of gold may continue to consolidate ahead of the Federal Open Market Committee (FOMC) rate decision as the central bank is widely expected to deliver another 75bp rate hike, and the advance from the yearly low ($1681) may turn out to be a correction in the broader trend as the 50-Day SMA ($1802) continues to reflect a negative slope.

As a result, the precious metal may face headwinds throughout the remainder of the year as the FOMC plans to push the Fed Funds rate above neutral, and it remains to be seen if Chairman Jerome Powell and Co. will step up their efforts to curb the ongoing rise in the US Consumer Price Index (CPI) as the central bank aims to foster a soft-landing for the economy.

In turn, the price of gold may continue to trade to fresh yearly lows as long as the FOMC stays on track to implement a restrictive policy, but a shift in the Fed’s forward guidance for monetary policy may prop up bullion if the committee looks to winddown its hiking cycle over the coming months. 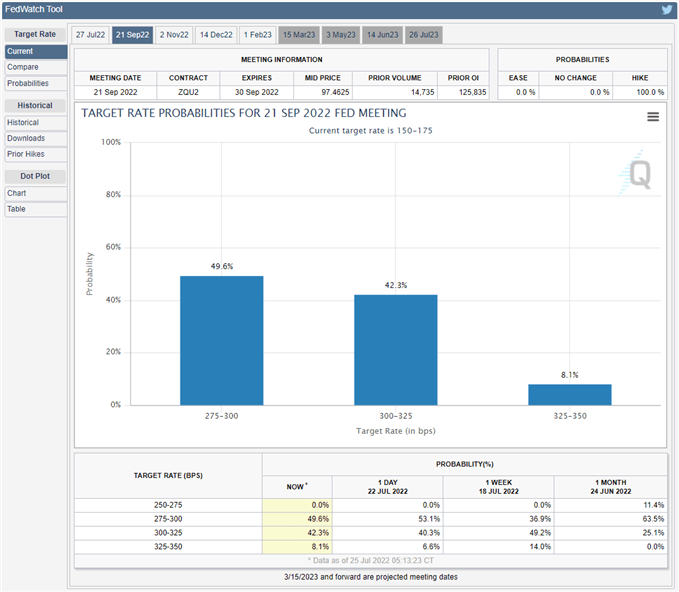 According to the CME FedWatch Tool, the Fed is expected to adjust monetary policy at a slower pace in the fourth quarter, with the gauge reflecting a 50% probability for a 50bp rate hike in September.

With that said, a shift in the Fed’s forward guidance may lead to a larger recovery in the price of gold if the central bank looks to slowdown its hiking cycle, but the precious metal may continue to face headwinds if the committee retains the current course for monetary policy. 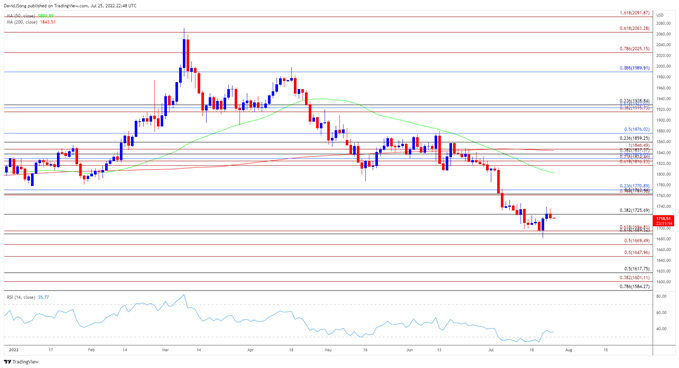