The Japanese Yen continued to weaken against its major counterparts this past week. This is something the currency has been quite familiar with this year. As major central banks around the world increasingly became more hawkish, the Bank of Japan remained a dovish standout. With monetary policy a key component in driving currencies, this will be a critical headwind for JPY.

With that in mind, all eyes turn to the Bank of Japan. Its next interest rate announcement is on July 21st. Not much of a surprise is expected here. Governor Kuroda is seen maintaining an ultra-loose policy despite local inflation being above target. Speaking of that, before the BoJ, we will get the next update on local inflation.

Japanese CPI is seen clocking in at 2.4% y/y in June, down from 2.5% prior. This is just slightly above the central bank’s 2.0% price target. Elevated commodity prices have likely been playing a key role in keeping inflation rising as Japan is an importer of energy. Despite crude oil prices coming down in recent weeks, it seems that a weak Yen could contribute to boosting local inflation.

As such, the decline in oil could be offset somewhat by the weaker Yen in terms of the impact on local CPI in the months ahead. But, at the end of the day, until (or if) the BoJ springs into action, it seems that its currency will remain at the mercy of factors outside of the nation’s control. While the central bank delivered some verbal jabs against the weaker currency, it has done little to tame it.

On the chart below is a majors-based Japanese Yen index. It is an average of the Yen against the US Dollar, Australian Dollar, Euro and British Pound. We can see that it bottomed in early June. That is around the time when crude oil topped. Not long after that, 10-year government bond yields in developed nations began to decline.

If this trend continues, then perhaps the Yen could see some breathing space. Sentiment is another key factor for the anti-risk currency. The decline in yields has been occurring amid rising fears of a recession. Markets have also been pricing in Fed rate cuts in 2023. While the path remains difficult for the Yen, it might see some relief should traders start to focus on a turnaround in aggressive monetary tightening. 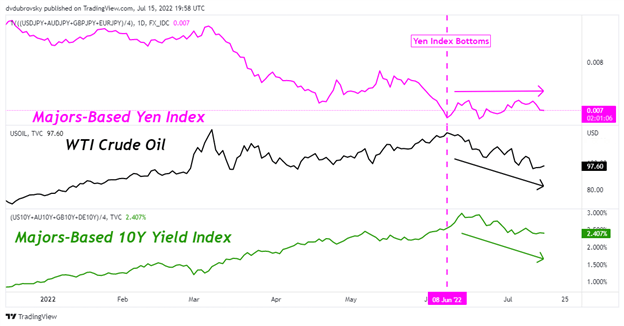