Home » News » Strategist » Japanese Yen Soars on Soft US CPI and US Dollar Pummelling. Where to for USD/JPY?

The Japanese Yen has appreciated dramatically in the aftermath of US CPI coming in softer than anticipated.

It gained around 1.6% against the US Dollar in the North American session, with USD/JPY trading as low as 134.03 at one stage. The US Dollar is weaker against every major currency.

US yields initially dipped across the curve on the news but then retraced most of the slide after Fed speakers hosed down hopes of rate cuts next year.

Federal Reserve Bank of MinneapolisPresident Neel Kashkari ruminated that he would like to see the Fed funds rate at 3.9% by the end of this year and at 4.4% by the end of 2023. He also said that the soft inflation data doesn’t change the Fed’s rate path.

Since he joined the Federal Open Market Committee FOMC) in 2015, he had previously leaned toward a dovish stance. At the outbreak of the pandemic, he became more flexible, making his hawkish views particularly noteworthy.

His views were backed up by Federal Reserve Bank of Chicago PresidentCharles Evans. He re-iterated that rates will be going up into the end of this year and next year.

Both Presidents are non-voting members of the FOMC this year, but Neel Kashkari will be voting in 2023.

While the rates market appeared to heed the jawboning, equity, commodity and currency markets kept the party going and continued to buy risk assets across the board.

The Japanese Yen gained in this environment on the perception that US CPI may have peaked. This could question the ability of the Bank of Japan’s negative interest rate policy (NIRP) to potentially fund carry trades when yields elsewhere might fall.

With Fed policy seemingly permeating all markets for now, Fed speakers are likely to be closely watched for clues on rate moves.

Later today, San Francisco Fed President Mary Daly is due to appear on Bloomberg Television. USD/JPY may see more volatility going into the end of the week.

USD/JPY REACTION TO US CPI 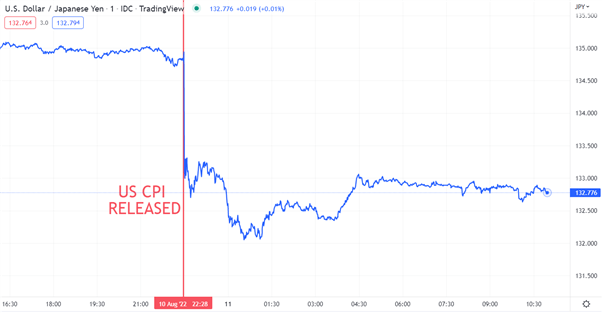