Home » News » Strategist » Japanese Yen Steadies Against USD as Bank of Japan is in Focus. Has USD/JPY Peaked?

The Japanese Yen faces a policy problem ahead as the Bank of Japan (BoJ) have committed to maintain their current stance on yield curve control (YCC) and monetary policy in general.

The Bank of Japan is now in the crosshairs of scrutiny with their meeting due to take place this Friday.

Central banks can loosen or tighten policy to bring future demand toward to today (loosen) or push demand away from today (tighten). The design of such changes is to manage inflation and inflation expectations.

The current global surge in inflation is mostly supply driven but their current ultra-loose monetary policy is enabling consumers to pay higher prices than would otherwise be the case.

In any case, the result is that growth has not picked in Japan as it enters a third decade of benign economic activity. The latest data shows annualised GDP at -0.5% year-on-year and headline CPI is 2.4% year-on-year.

Stagflation destroys wealth and it has arrived in Japan. Of concern is that inflation could be about to rocket higher. The rest of the world is facing much higher price increases and last week Japan’s PPI came in at 9.1% year-on-year to the end of May.

Companies have a choice of either passing on the increases in production costs or deal with margin compression and become less profitable or possibly start losing money. Either scenario undermines the economy.

On top of this, the Yen has depreciated significantly over the last 2-months. This leads to the potential of imported inflation as imports become more expensive.

The upside of a weaker Yen is that exports become cheaper to offshore buyers, giving the domestic economy a boost. This is what Japanese policy makers are hoping for.

Central bank policy works best when underlying fundamentals support it. If inflation doesn’t pick up and goes lower, the BoJ might get away with maintaining ultra-loose policy. If inflation starts to accelerate, it will start to become more difficult for them to hold such a policy.

The Reserve Bank of Australia (RBA) was effectively forced to abandon YCC late last year. They had accumulated more and more assets from a market that was willing to dump them. It got to the point where they held more than 50% of the government bonds on issuance for the part of the yield curve they were targeting.

The BoJ could face a similar scenario and it might be a topic of conversation at their meeting later this week. Until then the focus for markets will be around the Fed meeting on Wednesday ad US Dollar gyration may dominate in the interim.

Technically, one could argue that the 2020 high has not really been breach as it did not close above there. In any case, there might be resistance up to 135.20 if that area is revisited.

Last week the price above the upper band of the 21-day simple moving average (SMA) basedBollinger Bands. It has since moved back inside the band, and this may indicate a reversal is possible. 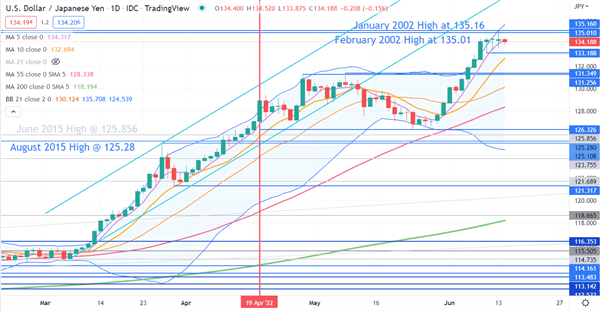