The stronger USD and higher US yields weighed on global market sentiment. Australia’s ASX 200, Japan’s Nikkei 225, and Hong Kong’s Hang Seng Index lost 2.25%, 2.29% and 3.10%, respectively. Germany’s DAX fell 1.66%, and the Euro Stoxx 50 Index shed 1.96%. European natural gas prices fell more than 9% as EU gas storage increased, with storage levels rising to 84.71% full as of September 14. An increase in LNG shipments from China has helped bolster the bloc’s supply ahead of the winter.

The Australian Dollar fell nearly 2% against the Greenback despite Australia’s August jobs report showing a rebound from July, which firmed up rate hike bets for the Reserve Bank of Australia’s October meeting. NZD/USD fell below the 0.6 level. The island nation’s second-quarter GDP growth rate increased 1.7% from the prior quarter. The Bank of Japan’s rate decision is in focus for APAC, but traders don’t expect to see a policy shift despite the Japanese Yen remaining near the 144 level. Governor Kuroda is likely to comment on the exchange rate after last week’s rate check, which was seen as a potential prelude to intervention.

Gold pierced below the critical 1,700 level, exposing prices to early 2020 levels. The yellow metal trimmed a portion of its losses on Friday, but the move may be the start of another leg lower. Rising real yields pose a major headwind for precious metals. Silver prices, however, managed to rise for a second week. That brought the gold/silver ratio to its lowest point since June. The CFTC’s COT report showed a decrease in non-commercial short positions, which likely helped the metal’s price.

Crude oil prices fell for the third week. A stronger US Dollar, rising central bank rate hike bets and China’s ongoing Covid lockdowns weighed on the commodity. The US Energy Information Administration (EIA) reported a 2.44 million barrel build in oil stocks for the week ending September 09. A downbeat outlook from FedEx concerned traders, with the delivery company warning of a global slowdown, citing weakness in Europe and Asia.

Europe is set for two major central bank decisions this week. A 75-bps rate hike from the Swiss National Bank (SNB) may bolster CHF. The Swiss Franc traded to its strongest level since January 2015 against the Euro. The British Pound hit a fresh multi-decade low against the Dollar. Overnight index swaps favor a 50-bps rate hike from the Bank of England on Thursday, although GBP’s weakness and rising FOMC bets set the stage for a possible surprise 75-bps hike. Monday is a bank holiday in the United Kingdom. 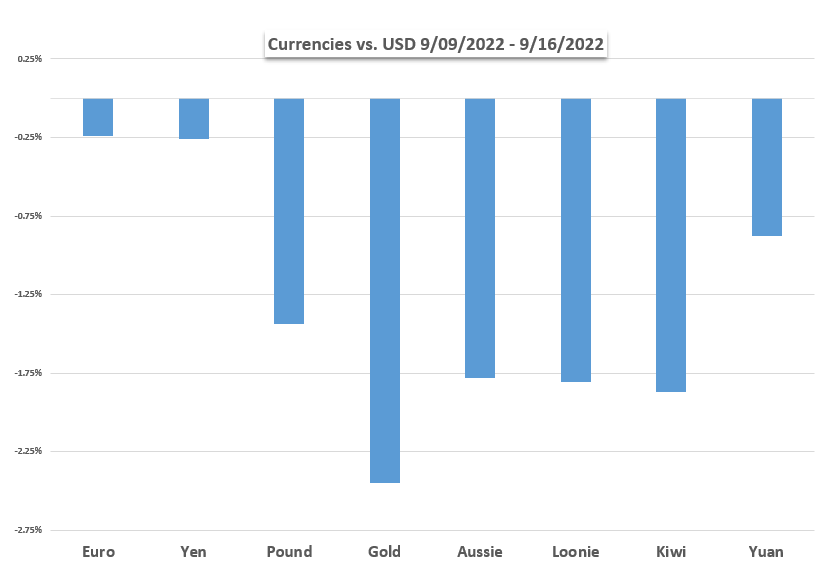 British Pound Forecast: GBP/USD Slumps to a 37-Year Low Ahead of the BoE

Cable dissolved earlier in the session as woeful UK retail sales figures and a robust US dollar sent the pair spiraling to a new multi-decade low.

The Fed interest rate decision may influence the near-term outlook for EUR/USD as the central bank is expected to retain its current approach in combating inflation.

USD/JPY volatility is likely to jump in the coming week in response to two high-impact events on the calendar: the monetary policy decision of the Fed and the Bank of Japan.

The Australian Dollar remains hostage to the machinations of the US Dollar as the RBA and the Fed are on similar but slightly different paths. Will rate differentials hit AUD/USD?

Bitcoin and Ethereum Forecast for the Week Ahead

Bitcoin and Ethereum were put through the woodchipper following this week’s hot CPI print. Will the FOMC meeting and the merge change anything?

The same factors continue to drive gold lower, and with it looking to trade below major support it’s poised to continue falling.

Sellers made a statement this week, printing a bearish engulf pattern after another highly-elevated CPI print, setting the stage for the September FOMC.

The US Dollar climbed last week but was unable to resume the uptrend. Still, the broader technical posture remains cautiously bullish, with a rectangle chart pattern brewing.

A sharp fall this week has brought gold to a critical juncture. Silver has been relatively resilient. What are the key levels to watch in the short term?

GBP/USD is crumbling under the strength of the U.S. dollar as markets look forward to the upcoming BoE and Fed interest rate decisions.

The Canadian Dollar continued its struggles this week. However, with a host of technical hurdles just ahead and the FOMC meeting, could we see CAD gains in the week ahead?