The Nasdaq 100 was subdued on Tuesday and failed to extend its pre-Memorial day gains, falling 0.31% to 12,642 in the session, despite a 4% rise in Amazon shares prices. With the pullback, the technology benchmark dropped 1.65% in May after a 13.37% plunge in April, although the monthly performance would have been worse if not for last week’s strong bullish reversal, which saw the index bounce nearly 10% from the 2022 lows.

Despite the upswing seen towards the end of the month, tech stocks will have a difficult time recovering on a sustained basis as price pressures remain rampant in the economy. While inflation likely topped out in the first quarter, it will struggle to come down significantly and convincingly in the coming months due to rising energy costs, preventing the Fed from veering off the tightening course.

Following the European Union’s decision to ban Russian crude imports, oil, which briefly hit a two-month high today, should remain biased to the upside ahead of the peak driving and travel season amid extreme market tightness. This situation will hinder any meaningful improvement on the inflation front, leading policymakers to retain a hawkish bias in the near term.

FOMC voting member Christopher Waller has been the first to raise the hawkishness level this month, indicating that he would support increasing interest rates in 50 bps increments for several more meetings and that he wouldn’t take supersized hikes off the table until inflation has moved down closer to the 2% target. This would represent a much more aggressive normalization cycle than what’s currently priced in. Against this backdrop, U.S. Treasury yields may soon end the downward correction that began three weeks ago and resume their ascent, further weighing on equity valuations.

Looking ahead, the week is packed with key economic data that will give traders the opportunity to assess the health of the economy, but the focus will likely be on the May nonfarm payrolls report and ISM (manufacturing and services PMI) surveys. If we see a sharp slowdown in the economy, recession fears will intensify, undermining risk assets. On the other hand, if data cools, but the magnitude of the slowdown is not extreme, sentiment could stabilize, giving the Nasdaq 100 some room to continue its recovery, but any upside should be limited considering the various headwinds plaguing the economy.

Despite rebounding almost 10% from its 2022 lows in recent days, the Nasdaq 100 remains stuck in a bear market, though sentiment appears to be on the mend, a situation that may pave the way for more gains in the coming days. Having said that, if the index manages to resume its recovery, initial resistance appears near the psychological 13,000 level, followed by 13,505, an area where the 50-day moving average converges with the 38.2% Fibonacci retracement of the 2021/2022 sell-off. On the flip side, if sellers return to fade the recent upswing and the price pivots lower, technical support rests at 12,600, and 12,250 thereafter. 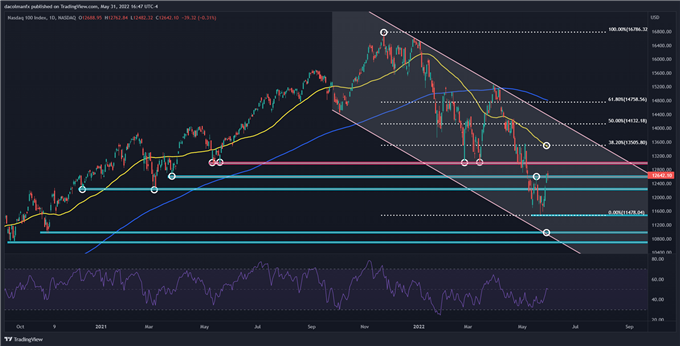