The market response to Tuesday’s US CPI release was distinct and severe. The risk aversion we were lead to registered the biggest single-day losses for benchmarks like the S&P 500 and Nasdaq 100 in over two years. It is easy to see in this abrupt reversal the potential for a cascading collapse in sentiment – particularly if you have tracked the forecasts for monetary policy and concern around recession – but that ‘capitulation’ is something that is not particularly easy to trigger. With a resilient reading on inflation – though notably not a return to record highs – it is perhaps not surprising to nascent risk appetite falter. On the other hand, a full-tilt unwinding of risk appetite is a different matter entirely. Fear should remain a lurking point of catalyst, but he more measurable fundamental routes are more likely to curb speculative momentum than feed it. With the FOMC rate decision – along with the updated forecasts and Powell press conference – looming large for an 18:00 GMT Wednesday, September 21st; it may prove difficult to foster an earnest trend through the immediate future. That should not be taken as prospect for quiet markets, but systemic drives will not be readily proffered. 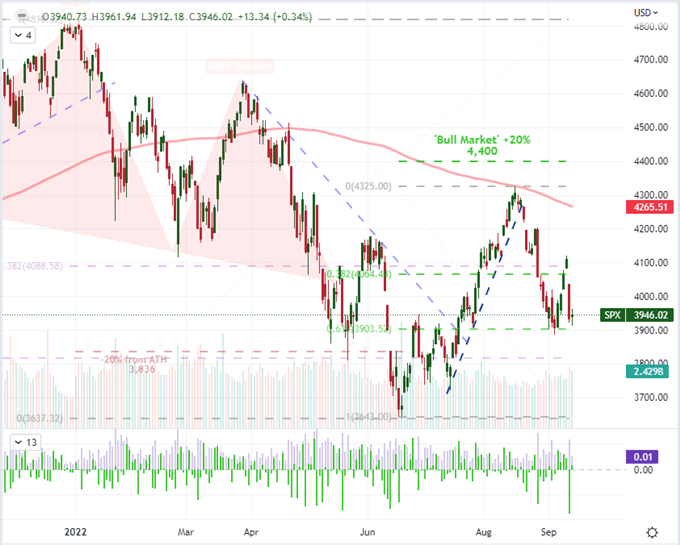 The problem with generating meaningful traction in these markets – whether via fundamentals, technicals or market conditions – is the anticipation for top event risk next week. Top billing so far this week (and likely through its end) was the US CPI on Tuesday. The inflation indicator has reiterated the persistence of high price growth which will support the Fed in an aggressive and persistent tightening regime while also adding to the fears of a possible recession – which the Fed has said it is willing to tolerate in order to get inflation under control. Over the next and final 48 hour so trade this week, there is some interesting systemic event risk to register; yet there is nothing on the docket that scales to the level of potentially reversing systemic trends. What can tip this uncomfortable balance/ 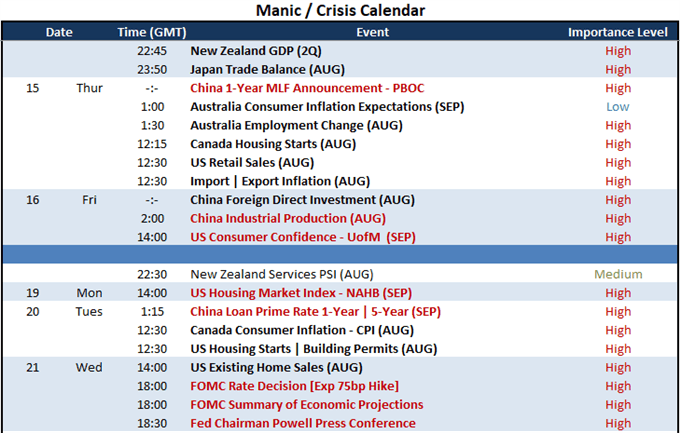 FED RATE EXPECTATIONS AND THE DOLLAR

Given the general hawkish assumptions priced into US risk-based assets and the Dollar, it is important to keep track of the market’s finely balanced view of Fed interest rate expectations. This past session, the probability of a 100-basis point rate hike (to 3.25 percent) eased slightly from Tuesday’s post-CPI enthusiasm, but we are still pricing in a 1-in-4 chance of a hike of that extreme magnitude. We are still a month out from this critical announcement, but the markets are perfectly fine to read skepticism in the data. Overall, Fed Fund futures have priced in a remarkably 75bp’ increase at the next meeting, but views form more conservative policy officials could still unfold moving forward. 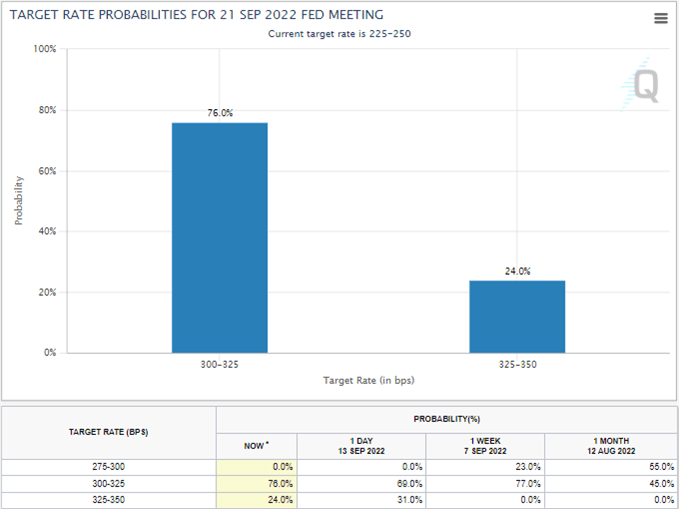 When it comes to interest rate differentials, the crosses based on the Japanese Yen are amongst the most extreme performances in the market. USDJPY is not far from highs since last tagged back in 1990 while other crosses see the anti-Japanese currency appetite spurred by risk aversion. I will be watching USDJPY closely going forward, and believe it is valuable for most. The pair has leaned against short-term trendline support after failing to forge a new leg higher this week. Overall, risk trends, relative growth forecasts and monetary policy disparity are top concerns moving forward. That said, in the event of true risk aversion, expect capital to flow into the liquid US markets, but Japanese traders will also be forced to deliver in this scenario.. 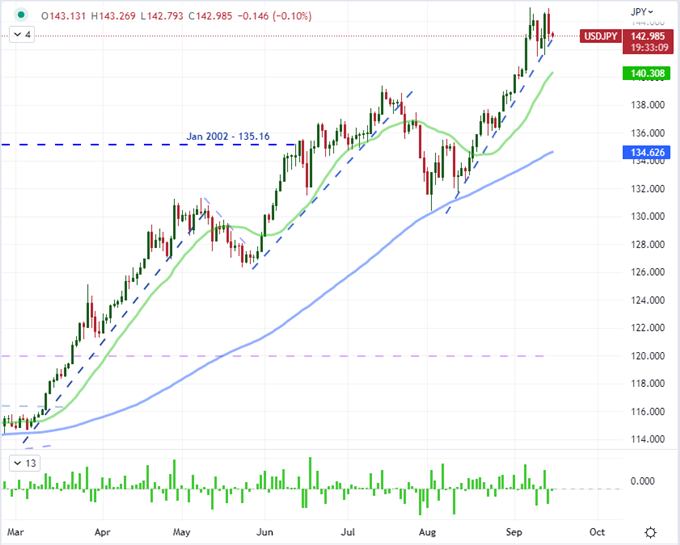 THE FUNDAMENTAL LINES TO TRACK

In balancing the market’s natural daze and the anticipation for top event risk starting in less than a week, it is not surprising that the market’s state of anticipation is allowed to run rampant. Yet, I’m more prone to finding tangible traction when projecting market intensions. Setting aside seasonal implications of market directions, volume and volatility; it is understandable to expect heavy surf. Instead, the docket has left us more than a little wanting – but the chart patterns are remarkable. The probability of a 100 basis point rate hike (though approximately a 30 percent chance at the next meeting could materially charge confidence. That said, the market’s appetite to read-in and critique policy updates shows there are different time frames, views and more at work.. 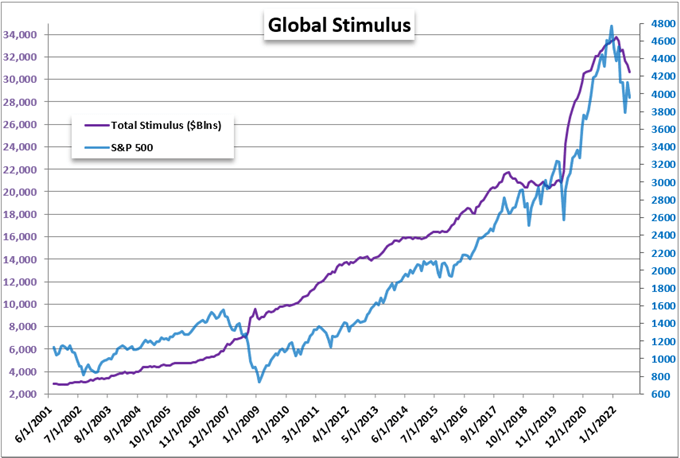 When it comes to Dollar-based pressure points, I am keeping a close eye out for volatility. As of late, the Greenback’s wobble versus the review from the US perspective. Naturally, the marketing interest is for a huge banner but hat seems quiet the lift. Furthermore, rates are not just a solo considerations. The potential from these markets can be somewhat more Singular so long as other passengers are not at risk of following into quantiles. 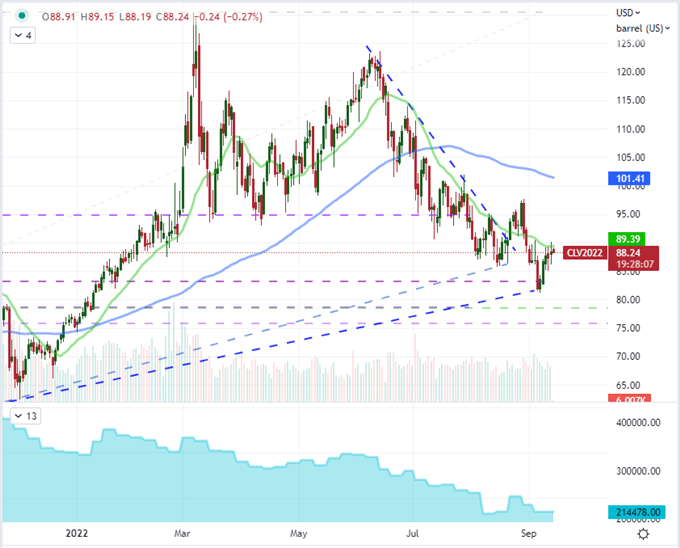