The Dow Jones continued to work on its fifth consecutive week of gains after the index rose0.71% on Tuesday, closing at 34,152 points. Meanwhile, the S&P 500 rallied and touched a three-month high but found resistance around the 200 Day Moving Average, a level it has not closed above since April. The index closed with a marginal gain of 0.19%. 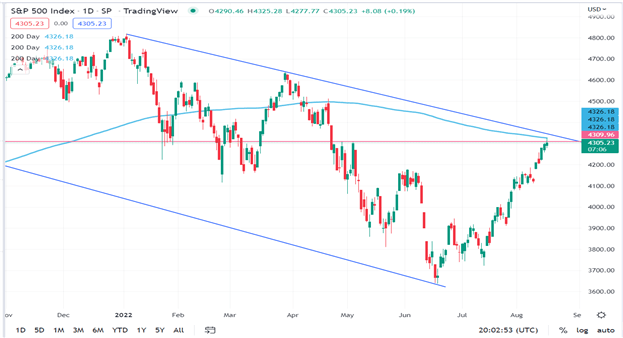 The Consumer Staples and Consumer Discretionary Sectors led the gains in the S&P 500 after large retailers such as Walmart and Home Depot beat Q2 corporate earnings expectations. In Walmart’s case, despite having lowered its profit guidance last month, the better-than-expected results confirm consumer strength in US markets. Home Depot surprised by reporting record profit and revenue despite higher interest rates and sticky inflation, although it will be interesting to see how their Q3 report evolves as signs of a slowdown in the Housing Sector are emerging. Another retail and meme stock, Bed Bath and Beyond, soared as retail investors have driven up the heavily shorted stock price in the past days in an apparent short squeeze similar to what was seen last year with Gamestop and AMC. Target and Lowe’s are due to report earnings tomorrow.

On the other hand, the Information Technology Sector showed losses today after Citigroup downgraded Zoom Video Communications Inc from Neutral to Sell ahead of the company’s earnings report next week. Also, Apple, announced more than 100 layoffs of contract-based recruiters as part of a previously announced reduction plan. These items weighed on the Nasdaq100 which closed with a marginal loss of 0.23%.

On another note, the US economy continues to send mixed signals in an environment of rising interest rates. After yesterday’s disappointing Empire State manufacturing index, the release of July’s better-than-expected industrial production and capacity utilization surprised investors. Today’s report from the Federal Reserve indicated that US industrial production increased for the first time in three months. The rise in output was driven by a strong increase in motor vehicle production (helped by an easing of semiconductors supply bottlenecks) and was able to offset a decline in household electronics, appliances, and furniture, – which is in line with the softer Housing Starts numbers released today too.

In retrospect, a slower CPI reading, mixed manufacturing activity, robust industrial production, softer housing, strong consumer spending and still-tight labor market, should give Fed officials “food for thought” at the next FOMC meeting in September. But in the near term, all eyes are on the release of the July FOMC minutes, due tomorrow, as investors debate whether the Fed will signal a slower pace of interest rate hikes.