USD/JPY appears to be tracking the recent advance in US Treasury yields as it retraces the decline from the yearly high (136.71), and the exchange rate may attempt to clear the October 1998 high (136.89) as a growing number of Federal Reserve officials show a greater willingness to implement a restrictive policy.

USD/JPY has retraced the decline following the Federal Reserve interest rate decision as it continues to hold above the 50-Day SMA (130.79), and the exchange rate may continue to track the positive slope in the moving average as St. Louis Fed President James Bullard, who votes on the Federal Open Market Committee (FOMC) in 2022, reveals that he was an “advocate of moving up the timetable for quantitative tightening (QT) in the US.”

During an event held by UBS, Bullard warns that “we had overstayed out welcome with asset purchases” as the central bank steps up its effort to combat inflation, and it remains to be seen if the FOMC will continue to adjust the forward guidance as its next interest rate decision on July 27 as the central bank plans to have a “sensible strategy” following the initial phases of QT.

Until then, the diverging paths between the FOMC and Bank of Japan (BoJ) should keep USD/JPY afloat as Governor Haruhiko Kuroda and Co. continue to carry out the Quantitative and Qualitative Easing (QQE) program with Yield-Curve Control (YCC), and the update to the core US Personal Consumption Expenditure (PCE) Price index, the Fed’s preferred gauge for inflation, may do little to influence the monetary policy outlook as it remains well above the 2% target.

The core PCE is projected to narrow for the second consecutive month, with the figure expected to print at 4.8% versus 4.9% per annum in April, and evidence of stick price growth may force the FOMC to prepare US households and businesses for a restrictive policy as the committee insists that “ongoing rate increases will be appropriate.”

In turn, USD/JPY may continue to track the positive slope in the 50-Day SMA (130.79) as it trades to a fresh yearly high in June (136.71), but the tilt in retail sentiment looks poised to persist as trades have been net-short the pair for most of 2022. 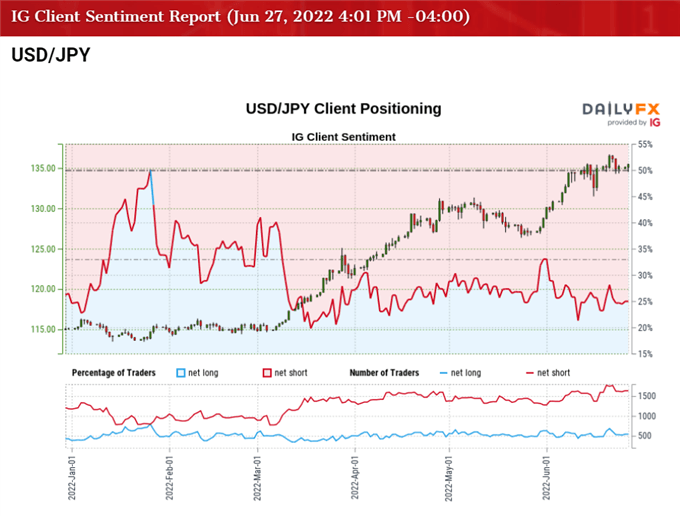 The IG Client Sentiment report shows 27.52% of traders are currently net-long USD/JPY, with the ratio of traders short to long standing at 2.63 to 1.

With that said, USD/JPY may continue retrace the decline from the yearly high (136.71) as a growing number of Fed officials show a greater willingness to implement a restrictive policy, and the exchange rate may attempt to clear the October 1998 high (136.89) amid the recovery in US yields. 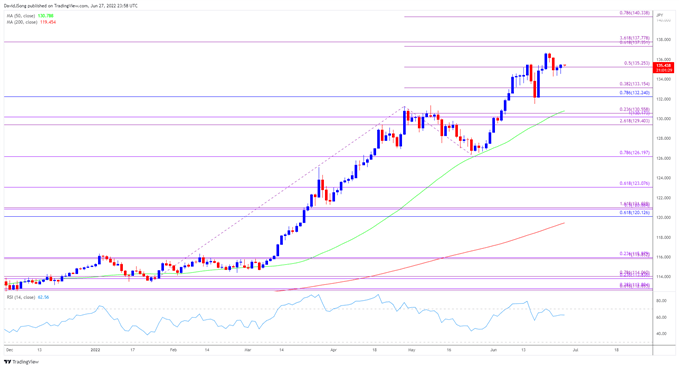