Home » News » Strategist » Weekly Fundamental US Dollar Forecast: Up, Up, and Away 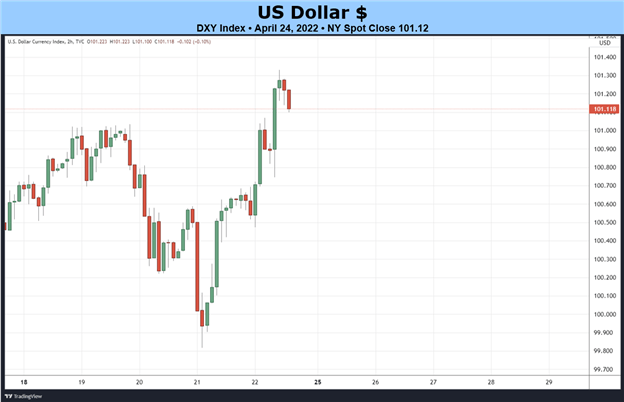 FUNDAMENTAL FORECAST FOR THE US DOLLAR: NEUTRAL

US DOLLAR WEEK IN REVIEW

The US Dollar’s (via the DXY Index) strong run continued through the third week of April, adding another +0.62%. The DXY Index has been positive in 12 of the 16 weeks thus far in 2022, good for a +5.69% advance year-to-date. EUR/USD rates, which spent most of the first four days of the week in positive territory, ended up down by -0.11%. GBP/USD rates dropped by -1.71%, their worst weekly performance since June 2021. USD/JPY rates added +1.69%, their seventh consecutive weekly gain.

The narrative behind the US Dollar’s ascent has remained consistent for much of this year: the Federal Reserve is on the verge of a series of significant rate hikes – just look at some of the recent comments by FOMC members – while other major central banks are not. Widening interest rate differentials are propping up the US Dollar, plain and simple.

US ECONOMIC CALENDAR IN FOCUS

After a relatively quiet week on the data side (although there were Fed speakers aplenty), the US economic calendar is supersaturated with data releases that should prove market moving. Gauges of US consumer spending, US consumer confidence, the US jobs market, the US housing market, and US inflation pressures are all due out in the coming days.

RECOMMENDED BY CHRISTOPHER VECCHIO, CFA
Trading Forex News: The Strategy
Get My Guide 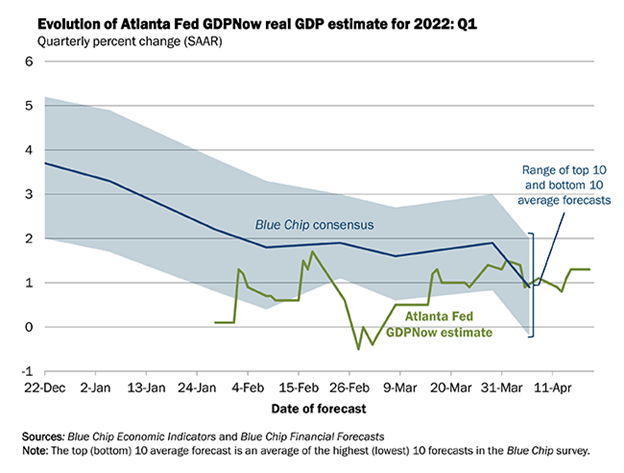 Based on the data received thus far about 1Q’22, the Atlanta Fed GDPNow growth forecast is now at +1.3% annualized, up from +1.1% on April 11. The upgrade was a result of “the nowcast of first-quarter real gross private domestic investment growth [increasing] from -0.8% to +0.1%.”

With a new multi-decade high in US inflation rates, markets have dragged forward expectations for a rapid pace of rate hikes over the coming months. We can measure whether a Fed rate hike is being priced-in using Eurodollar contracts by examining the difference in borrowing costs for commercial banks over a specific time horizon in the future. Chart 1 below showcases the difference in borrowing costs – the spread – for the May 2022 and December 2023 contracts, in order to gauge where interest rates are headed by December 2023. 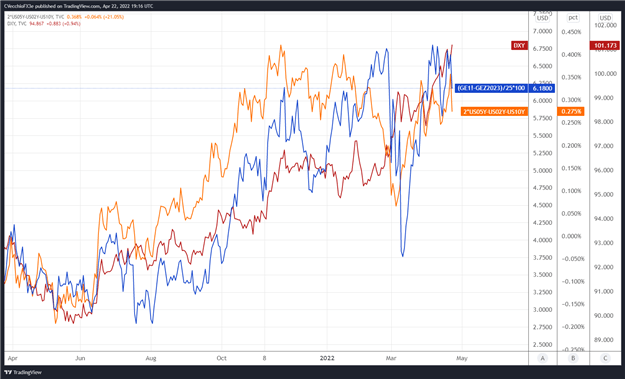 By comparing Fed rate hike odds with the US Treasury 2s5s10s butterfly, we can gauge whether or not the bond market is acting in a manner consistent with what occurred in 2013/2014 when the Fed signaled its intention to taper its QE program. The 2s5s10s butterfly measures non-parallel shifts in the US yield curve, and if history is accurate, this means that intermediate rates should rise faster than short-end or long-end rates.

After the Fed raises rates by 50-bps in May, there are six 25-bps rate hikes discounted through the end of 2023 thereafter. The 2s5s10s butterfly has traded sideways in recent weeks, suggesting that the market has retained its overall hawkish interpretation of the near-term path of Fed rate hikes. Focus remains more on the Fed and less on Russia’s invasion of Ukraine. 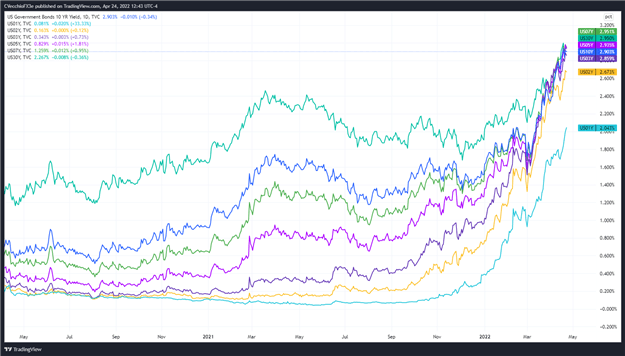 The shape of the US Treasury yield curve coupled with elevated Fed rate hike odds continues to underpin US Dollar strength. The rebound in US real rates (nominal less inflation expectations) further supports what has been a rapid rise by the greenback throughout April. As it stands, it appears that markets are expecting the Fed to raise rates in 50-bps increments in each of the next few meetings, another significant bonafide for the greenback (particularly given the growing chasm between expectations among the Fed, Bank of Japan, and European Central Bank). 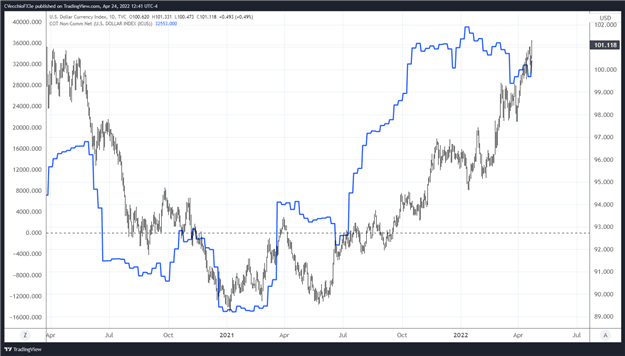